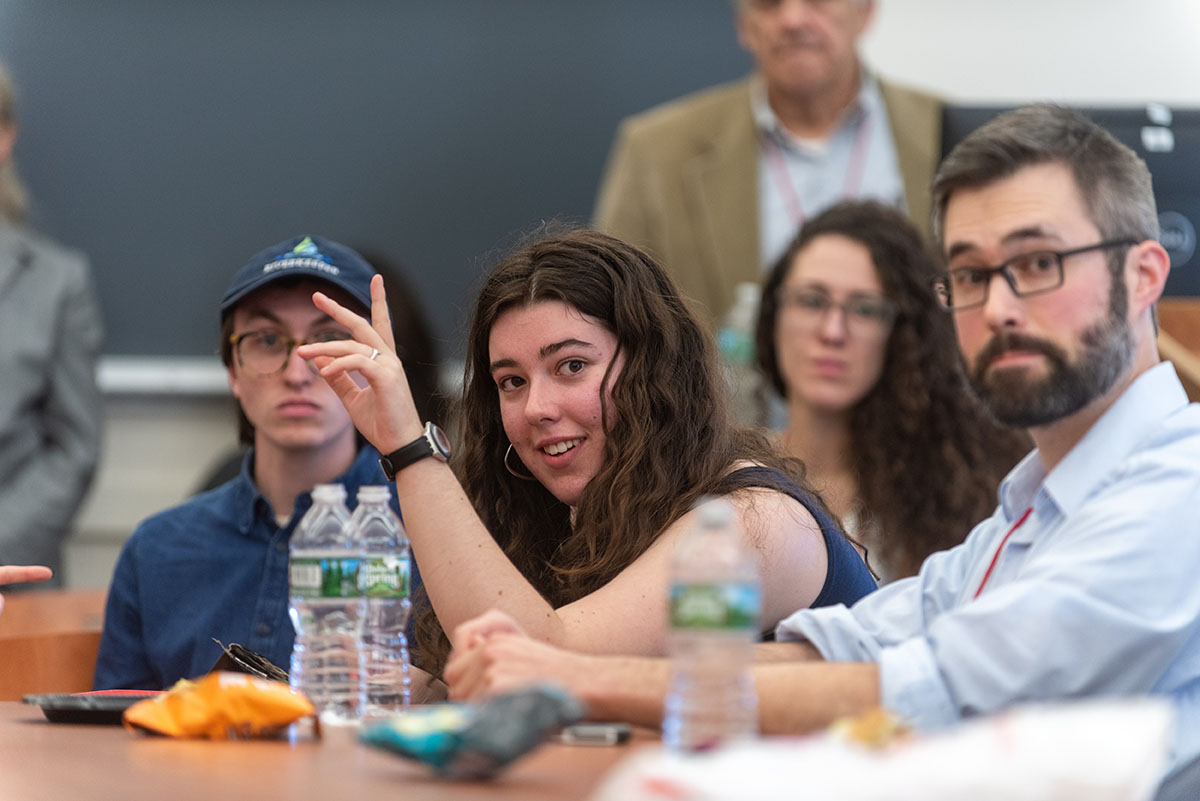 Bard students in discussion at the Hannah Arendt Center for Politics and Humanities annual conference.
Photo by Karl Rabe

Beginning in Fall 2022, the Politics program will introduce a new core curriculum and set of moderation requirements.  The new core curriculum includes the following required course--The Politics of Citizenship--and three thematic core courses (of which students take two): Authority, Equality, Freedom; Nations, Regimes, Societies; and Anarchy, Violence, Power. Students should consult their advisors to decide which of the new core courses they should take to complete their moderation requirements.

Cross-listed: GIS, Human Rights
This course provides an introduction to competing theories about the structure, functioning and transformative potential of the international system. Part 1 deals with the traditional problem of international life, maintaining order among relatively equal states in a condition of anarchy. Part 2 calls the assumption of anarchy into question by looking at hierarchical power relationships in a variety of issue areas. Part 3 addresses contemporary challenges to the state’s authority and the problems of governing in an increasingly global community. Throughout the course an effort will be made to illustrate the relevance of theoretical disagreements for the real world. Students will be evaluated on their understanding of the assumptions and logics of competing theories as well as their ability to apply those theories to historical and contemporary global problems.

Cross-listed: GIS
The basic intellectual premise of comparative politics is that we can better understand the politics of any country by privileging its internal norms, processes and institutions in a broad cross-national perspective. This comparative "method" allows us to address some of the most fundamental questions in the study of politics, such as what makes democracy possible, how is political representation organized around the world, and why some nations are more successful than others at generating wealth and prosperity, while contributing to the building of theories about the nature and evolution of states, interest groups, civil society, and the dynamics of political processes such as revolution, modernization, and democratization. Class lectures and discussions will cover developed and developing states, as well as democratic and non-democratic ones.

Cross-listed: GIS
The term Political Economy refers to the interrelationship between politics and economics. However, political scientists and economists do not always use the term in the same sense. Even within these two disciplines the term has multiple meanings. The course will review the ideas of a few major thinkers such as Adam Smith, Karl Marx, Karl Polanyi, Thorstein Veblen, John Maynard Keynes, and John Kenneth Galbraith, and will introduce students to two subfields in particular: international political economy and the political economy of development. Among the questions we would ask are: Why are some countries rich and others poor? What is development? What are the prime movers of globalization? Is the US an empire given its influence and power in the global economy? How can development be redefined to tackle the challenge of climate change? Among issues that we will look at closely is the role of organizations such as the International Monetary Fund, the World Bank, and the World Trade Organization in managing the global economy and the current debates about reforming these institutions.

This course offers a survey of Western political thought. We will examine themes like justice, freedom, and equality by exploring the writings of thinkers stretching from Plato to Malcolm X. In each case, we will attend to the particular crises these theorists addressed in their work, like civil war, revolution, democracy, and capitalism. We'll also learn how authors used their concepts and ideas to address the problems of their day, and how we may draw on them in our own political struggles.

This course introduces students to the basic institutions and processes of American government. The class is meant to provide students with a grasp of the fundamental dynamics of American politics and the skills to be an effective participant in and critic of the political process. During the semester, we will examine how the government works, interpret current political developments and debates, and consider how to influence the government at various levels.

Political Studies 167: Foundations of the Law

cross-listed: human rights
Corporate executives hire high-priced lawyers to flout the law with impunity. Indigent defendants are falsely convicted, and even executed for crimes they did not commit. We say that law is the institutional embodiment of justice. And yet, it is equally true that law, as it is practiced, seems to have little connection to justice. As the novelist William Gaddis writes: “Justice? You get justice in the next world. In this world, you have the law.” This course explores the apparent disconnect between law and justice. Can contemporary legal systems offer justice? Can we, today, still speak of a duty to obey the law? Is it possible for law to do justice?  Through readings of legal cases as well as political, literary, and philosophical texts, we seek to understand the problem of administering justice as it emerges in the context of contemporary legal institutions. Texts will include Immanuel Kant, Groundwork of a Metaphysic of Morals,  Herman Melville, Billy Budd, and selections from Dostoevsky, Twain, Melville, Plato, Blackstone, Holmes, Milton, Kant, and others.

What does it mean to be a global citizen? This question has gained increasing salience as the world has become more globalized. With globalization new problems surface that cut across national borders and fall outside the jurisdiction of individual nation-states. In response new forms of political organization have emerged to address these problems, which challenge the state as the primary locus of political authority and ultimate source of individual rights. In particular, these individuals and groups have appealed to a kind of global citizenship from below to call for action on and demand redress for the harms created by globalization. This interdisciplinary course critically examines the conceptual and theoretical foundations of the concept of global citizenship and investigates how the idea might work in practice. We begin by considering the conceptual, philosophical and historical debates about citizenship. What does it mean to be a citizen of a particular state? What obligations and responsibilities accompany citizenship? How have understandings of citizenship changed and expanded over time? What is global citizenship and how does it differ from national citizenship? Next we evaluate these ideas about citizenship in the context of globalization and the new problems created by an increasingly interdependent world. Topics covered may include: migration and refugees; the environment and resources; (in)security and borders; health and infectious disease; and development and inequality. We conclude by assessing the role (if any) global citizenship can play in global governance and consider how the international system might be transformed to better address the challenges of globalization. This course will be taught concurrently at Bard's international partner institutions. Students will benefit from collaboration with peers at these institutions.

This course will explore historical, philosophical and practical elements of civic engagement while exploring the underlying question of what it means to be an engaged citizen in the early XXIst century. It will examine notions of personal responsibility, civic duty, political participation (including voting), and social justice. It will explore modes of community engagement on a number of levels, including governmental (especially local government), not-for- profits, and various forms of associational life. The course will have a local focus, but national and international issues and comparisons will be explored. This is an engaged liberal arts and sciences class, that will require out of class fieldwork and civic engagement projects that will contextualize their in-class study. This course is a network course that will be taught concurrently at Bard's international partner institutions. Students will benefit from collaboration with peers at these institutions.

From Brexit to the election of Donald Trump to the rise of ethno-nationalist political parties across Europe and beyond, nationalism has taken center stage as a driving force in international political life.  For even the most casual observer of European and American politics, it is obvious that nationalism plays a foundational role in contemporary movements and ideologies. It is important to note, however, that nationalism is not a recent phenomenon. Throughout the 20th century, nationalism remained a central animating factor of domestic and international politics.  It is the time where the concept of the nation-state replaced alternative political arrangements to become the dominant ordering principle in world politics. With the end of the Cold War and the apparent rise in globalization, many anticipated an emerging conflict between nations and states a conflict that has manifested in a variety of ways. Nationalism intersects and overlaps countless other areas of political, social, and cultural concern. This class will explore the historical emergence of nations, their social and political construction, and the means by which they are produced and reproduced in political life. We will investigate the intersection of nationalism and race, ethnicity, culture, gender, postcoloniality, and subjectivity through authors such as Du Bois, Anderson, Brubaker, Butler, Puar, and Rankine. This course will be taught concurrently at Bard's international partner institutions. Students will benefit from collaboration with peers at these institutions, as well as have the opportunity to engage students from these institutions on the issues raised by the class.

Engaged Liberal Arts and Sciences (ELAS) courses link coursework and critical thinking skills with engagement activities that contextualize course materials and enhance learning. A significant portion of the learning takes place outside of the classroom, where students engage with different geographies, organizations, and programs in local communities, or in the communities where Bard’s national and international partners are based.

Voting is an essential democratic right, yet in the United States the voting process is largely governed by a patchwork of state laws that are enforced by local officials. The first part of the course will concentrate on voting in the United States in the run-up to the 2016 elections. The focus will be on the history of voting in the United States from the founding of the Republic to the present, including voting rights, the spread of the franchise, strategies of disenfranchisement, and contemporary challenges to the process of registration and voting. The post-election portion of the course will use comparative approaches, including the experience of other countries, to explore a variety of themes ranging from the structure of electoral systems to the future of electronic voting. The course is designed as an Engaged Liberal Arts and Sciences course, meaning that it will feature class visits from political officials and candidates and their representatives, and that all students will be required to engage with the election process outside of the classroom.

This course is on the manner in which modern American political campaigns are conducted. It will seek to integrate actual experience of campaigns within a broad study of scholarly discussions of the nature of democracy and the mechanisms of modern campaigns. Topics to be explored will include the role of campaign finance, the idea of “the permanent campaign,” the invisible primary, the role of media in campaigns, and the potential for activist organization within the modern political system.  Alongside and integrated into the discussions of scholarly materials will be active engagement in the 2018 electoral cycle which will reach its peak in the fall.